PDE Mahabharata: The Burning of the Forest

Reading Guide. This episode tells about a famous adventure that Arjuna and Krishna have together. The meeting with Maya, the divine architect of the gods, will prove to be a crucial event in the series of events (leading to catastrophe!) that will take place when Arjuna returns home to Indraprastha. About Maya: this is the masculine for of the name (pronounced May-uh), as opposed to the feminine form, Mayā (Mayah). The masculine Maya is an asura, sometimes called Mayasura, while the feminine Maya is the goddess of the illusion that we call reality. You can read more about both Mayasura and about Mayā at Wikipedia. You may recalled Maya (Mayasura) from the Ramayana; he was the father of Mandodari, King Ravana's chief wife.

Subhadra | 34. The Burning of the Forest | Maya's Palace

During Krishna’s visit the Pandavas entertained him at a great picnic on the banks of the Yamuna. The women in the party took so much liquor that their gait became unsteady, and they began to sport. Draupadi and Subhadra in their intoxication gave away many costly robes and ornaments to their female companions.

When Krishna and Arjuna were sitting together telling of their exploits, a brahmin with matted locks and clothed in rags approached them. The two heroes at once got up, and stood waiting to receive his commands. The brahmin said he wanted food, but not ordinary food. He was indeed Agni the god of ﬁre and the food he wanted was the Khandava forest. He had tried to consume it more than once, but Indra had always put out the ﬁre with torrents of rain. Agni asked the heroes to help him. He had been drinking so much ghee at a twelve years’ sacriﬁce, that he had got weak and pale. The only way to restore his vigor and brightness was to consume the Khandava forest.

Krishna and Arjuna agreed to help Agni if he got them celestial weapons. This he did. He got a bow from the god Varuna with an inexhaustible quiver full of arrows, and a chariot full of weapons. Krishna also got a mace and discus.

A great battle ensued. Indra was defeated. When he poured down torrents of rain, Arjuna extinguished it with his arrows. Great multitudes of animals, uttering fearful yells and in great agony, perished in the ﬂames. Only six creatures escaped: the snake Ashwasena, a son of Takshaka; four birds; and the demon Maya, who was the son of a rishi. But the object was accomplished, and Agni became once more bright and vigorous. He had drunk rivers of fat and marrow.

Krishna | The Burning of the Forest | Maya's Palace 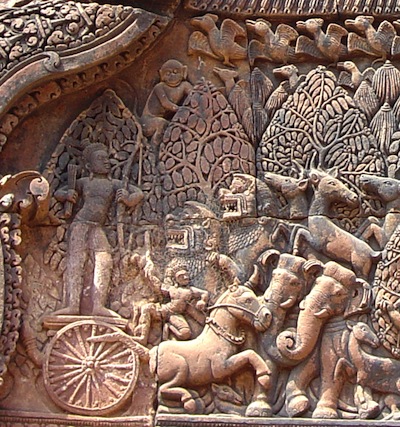 Free books to read and enjoy: Tiny Tales of India,Tiny Tales from the Ramayana, and Tiny Tales of Mahabharata... and more to come: 100Words.LauraGibbs.net.