PDE Mahabharata: Arjuna and the Apsaras

Reading Guide. This wonderful episode of Arjuna's exile will probably remind you of a fairy. It comes from Kincaid's retelling of the Mahabharata which you might want to consider as a reading option later on; as you can see, he has a lively and vivid storytelling style.

Image. The image shows an Indian crocodile. In his book, Kincaid refers to the creatures as "alligators," but technically speaking the Indian animals are crocodiles, not alligators.

Then leaving the Ganges, Prince Arjuna wandered on until he came to the sea shore. And at a spot where a river flowed into the sea, a band of holy men had made their dwelling place.

When Prince Arjuna saw them, he begged for their blessing. And when they had blessed him, he told them that he wished to bathe in the waters of the river. But they tried to dissuade him. "The river," they said "is haunted by a man-eating alligator. And if thou bathest, it will surely devour thee as it has devoured others."

But Prince Arjuna in the pride of his youth and courage laughed at their warning and, stripping off his garments, he plunged into the cool waters of the river. He had hardly swum into midstream when he felt an alligator's jaws seize him by the leg. And strive as he might he could not free himself. His strength was ebbing fast from pain and from his efforts to swim to shore, and he had all but given himself up to death.

Suddenly the words of the nymph Ulupi flashed across his brain: "Although thou wilt not stay with me, I yet will give thee this as my parting present that thou shalt never be conquered by any creature that lives in the waters."

Then his courage revived, and with all his remaining strength he swam for the shore, dragging the alligator after him. When he reached a spot where he could stand, he drove his thumbs into the alligator's eyes until the monster loosed his hold. Then, seizing it round the body with his arms, he flung it ashore as if it had been a log that had floated down with the current.

And lo! Directly the alligator fell on the dry ground, it changed its shape and became a lovely girl who smiled at Prince Arjuna from the bank. Prince Arjuna could scarcely gather voice to ask the maid the cause of what had happened. But she replied with a laugh that made her look even fairer than before.

"Prince Arjuna, I once was a water nymph and beautiful as thou seest me now. And there were four other nymphs my friends who were as fair as I, and wherever I went they never failed to go also. One day we came to the hermitage of a holy man who had given up the world and its beauties and its temptations, and lived all by himself worshipping the gods in a lonely forest glade.

"When we saw him, we thought we would make him break his vows. And we smiled at him and embraced him and tried in a hundred ways to make his thoughts turn from the gods to us. But we tried in vain. After warning us several times, he at last lost all patience. Praying to the gods he called down on us a terrible curse. And the curse was that we should become alligators and remain so for a hundred years.

"We threw ourselves at his feet and begged him to forgive us. But he would not wholly take back his curse, and he said, 'O nymphs, I have cursed you, and alligators you will become. But you may regain your forms once more when a hero by name of Arjuna the Pandava comes and drags you to land.' And thus as thou didst overcome me, O Prince, and didst drag me to shore, I know that thou art Prince Arjuna the Pandava. And I have yet another boon to ask of thee, which is to come with me where my sister nymphs dwell in various spots as alligators so that thou mayst drag them ashore also, and they may regain their forms as water nymphs."

Prince Arjuna readily agreed and, going with the water nymph to the various spots where her sister nymphs had as alligators hidden themselves, he plunged boldly into the waters and dragged them one after another ashore. One after another they became beautiful smiling girls. And when all five had regained their former shapes, they embraced Prince Arjuna and thanked him each in turn. And then with smiles on their rosy lips they dived beneath the water of the river near them, and Prince Arjuna's eyes never rested on them again.

Ulupi | Arjuna and the Apsaras | Chitrangada 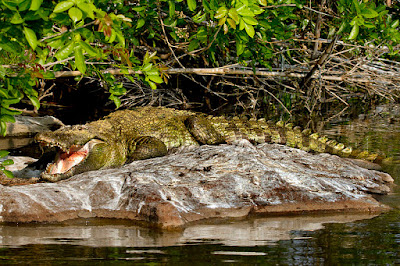 Indian crocodile
Posted by Laura Gibbs at 1:24 AM