Reading Guide. After the wanderings of the horse are over, it is time for the ritual itself, and Yudhishthira will now become sovereign king.

Yudhishthira had meantime lived a life of purity and self-restraint. Each night he lay upon the ground, and always slept within the city. Beside him lay Draupadi, and a naked sword was ever betwixt them.

Yudhishthira embraced Arjuna and kissed him and wept tears of gladness, and welcomed Arjuna's son, Babhruvahana, Rajah of Manipura, and also the other rajahs who had followed the sacred horse.

Twelve days after the return of Arjuna, and on the day when Magha's full moon marked the close of the winter season, the people assembled in great multitudes from far and near to share Yudhishthira's generous hospitality and witness the Ashwamedha ceremony, which was held upon a green and level portion of consecrated ground. Wise Vyasa was there, and he directed the ceremony. And Krishna, the holy one, was there also.

When all the guests were assembled, Yudhishthira and Draupadi bathed together in the sacred waters of the Ganges. Then a portion of ground was measured out, and Yudhishthira ploughed it with a golden plough. Draupadi followed him, and sowed the seeds of every kind which is sown in the kingdom, while all the women and the brahmins chanted holy mantras. Then a golden altar was erected with four broad layers of golden bricks, and stakes of sacred wood from the forest and from Himalaya, and it was canopied and winged with gold-brocaded silk.

Then eight pits were dug for Homa of milk and butter to be made ready for the sacrificial fire, and in skins were wrapped up portions of every kind of vegetable and curative herb which grew in the kingdom, and these were placed in the Homa pits.

On the ground there were numerous sacrificial stakes, to which were tied countless animals — bulls and buffaloes and steeds, wild beasts from forest and mountain and cave, birds of every kind, fishes from river and lake, and even insects.

The priests offered up animals in sacrifice to each celestial power, and the feasting was beheld by sacred beings. The gandharvas sang, and the apsaras, whom the gandharvas wooed, danced like sunbeams on the grass. Messengers of the gods were also gathered there, and Vyasa and his disciples chanted mantras to celestial music. The people lifted up their voices at the sound of rain drum and the blast of the rain trumpet. Then bright was the lustre of Yudhishthira's fame.

When all the kings and royal ladies and sages took their places to be blessed by the horse sacrifice, Yudhishthira sat on his throne, and in his hand he held the horn of a stag.

Vyasa sent four-and-sixty rajahs with their wives to draw water from the holy Ganges. Many musicians went with them beating drums and blowing trumpets and playing sweet instruments, and girls danced in front, going and returning. And all the rajahs and their wives were given splendid raiment by Yudhishthira, and necklaces of jewels also, and he put betelnut in their mouths one by one. To the brahmins were gifted much gold and many jewels, and elephants, horses, and kine, and they were well pleased.

Yudhishthira then sat naked in his throne, and each one who had drawn holy water poured a quantity over his head, and they poured what remained over the head of the sacred white horse.

Nakula held the horse's head, and said, "The horse speaketh."

Those who were about him asked in loud voices, "What doth the horse reveal?"

Said Nakula, "Thus speaketh the horse — In other such ceremonies the horse which is sacrificed departs unto Swarga, but I shall rise far above Swarga, because that Krishna is here."

Then Dhaumya, having washed the horse, gave a scimitar to Bhima with which to strike off the head at a single blow. But before this was done, Dhaumya pressed an ear of the holy animal, and milk flowed forth. Then he said to Bhima, "Pure indeed is the horse; verily the gods will accept the sacrifice. Strike now, O strong one."

Bhima raised the scimitar and severed the head, which immediately ascended unto heaven and vanished from before the eyes of all. Great was the wonder and the joy of the assembled multitude.

Krishna and other rajahs and sages then cut open the horse's body, from which a bright light issued forth. They found that the animal was pure, and Krishna said unto Yudhishthira, "This, thy sacrifice, is acceptable unto Vishnu."

Draupadi was made Queen of the Sacrifice, and mantras were chanted, and she was adored and given rich offerings, because of her virtue and her wisdom.

Said Krishna, "Thy fame will endure for ever."

Yudhishthira made answer, "Unto thee do I owe all these blessings."

Thereafter Krishna and the rajahs poured holy water over the heads of Yudhishthira and Draupadi. 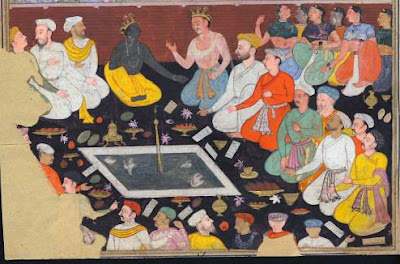 Krishna and Yudhishthira at the sacrifice.