All men watched the deadly combat which was waged between the mighty heroes Arjuna and Karna. They began by shooting arrows one at another, while Krishna and Shalya guided the chariots with prowess and care. The arrows of Arjuna fell upon Karna like to summer rain; Karna's arrows were like stinging snakes, and they drank blood. At length Arjuna's celestial bow Gandiva was struck and the bow-string severed.

Arjuna said, "Pause, O Karna. According to the rules of battle, thou canst not attack a disabled foeman."

But Karna heeded not. He showered countless arrows, until his proud rival was wounded grievously on the breast.

When Arjuna had restrung his bow, he rose up like to a stricken and angry tiger held at bay, and cast a screen of arrows against his foe. But Karna feared him not, nor could Arjuna bear him down. The issue hung in the balance.

Then suddenly a wheel of Karna's chariot sank in the soft ground, nor could Shalya urge the horses to advance.

Karna cried out, "Pause now, O Arjuna, nor wage unequal war. It is not manly to attack a helpless enemy."

Arjuna paused, but Krishna spake quickly, saying, "O Karna, thou speakest truly, but was it manly to shoot arrows at Arjuna whilst he engaged himself restringing his bow? Was it manly to scoff at Draupadi when she was put to shame before elders and princes in the gambling hall? Was it manly of thee and six warriors to surround Abhimanyu so as to murder him without compassion?"

When Arjuna heard his son's name, his heart burned with consuming wrath. Snatching from his quiver a crescent-bladed arrow, he drew his bow and shot it at Karna, whose head was immediately struck off.

So fell in that dread combat a brother by a brother's hand. 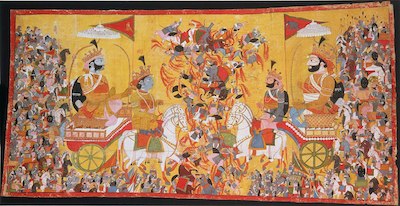