Reading Guide. You might think that the Pandavas have escaped disaster, thanks to Draupadi, but not so. There will be a second match, and it will end almost as badly as the first match, with no reprieve. As bad omens occur, you will see people shouting "Swashti! Swasthi" which is indeed related to the word "swastika," an ancient symbol of good luck in India, later misappropriated by the Nazis. You can find out more here: Swastika (Su-Astika).

Dhritarashtra was sitting in his palace, nor knew aught of what was passing. The brahmins, robed in white, were chanting peacefully their evening mantras, when a jackal howled in the sacrificial chamber. Asses brayed in response, and ravens answered their cries from all sides. Those who heard these dread omens exclaimed, "Swashti! Swashti!"

Dhritarashtra shook with terror, and when Vidura had told him all that had taken place, he said, "The luckless and sinful Duryodhana hath brought shame upon the head of Rajah Drupada's sweet daughter, and thus courted death and destruction. May the prayers of a sorrowful old man remove the wrath of Heaven which these dark omens have revealed."

Then the blind maharajah was led to Draupadi, and before all the elders and the princes he spoke to her, kindly and gently, and said, "Noble queen and virtuous daughter, wife of pious Yudhishthira, and purest of all women, thou art very dear unto my heart. Alas! My sons have wronged thee in foul manner this day. O forgive them now, and let the wrath of Heaven be averted. Whatsoever thou wilt ask of me will be thine."

Said Draupadi, "O mighty maharajah, thou art merciful; may happiness be thy dower. I ask of thee to set at liberty now my lord and husband Yudhishthira. Having been a prince, it is not seemly that he should be called a slave."

Dhritarashtra said, "Thy wish is granted. Ask a second boon and blessing, O fair one. Thou dost deserve more than a single boon."

Said Draupadi, "Let Arjuna and Bhima and their younger brethren be set free also and allowed to depart now with their horses and their chariots and their weapons."

Dhritarashtra said, "So be it, O high-born princess. Ask yet another boon and blessing and it will be granted thee."

Said Draupadi, "I seek no other boon, thou generous monarch: I am a kshatriya by birth, and not like to a brahmin, who craveth for gifts without end. Thou hast freed my husbands from slavery: they will regain their fortunes by their own mighty deeds."

Then the Pandava brethren departed from Hastinapura with Kunti and Draupadi, and returned unto the city of Indraprastha.

The Kauravas were made angry, and Duryodhana remonstrated with his royal sire and said, "Thou hast permitted the Pandava princes to depart in their anger; now they will make ready to wage war against us to regain their kingdom and their wealth; when they return they will slay us all. Permit us, therefore, to throw dice with them once again. We will stake our liberty, and be it laid down that the side which loseth shall go into exile for twelve full years, and into concealment for a year thereafter. By this arrangement a bloody war may be averted."

Dhritarashtra granted his son's wish and recalled the Pandavas. So it came to pass that Yudhishthira sat down once again to play with Shakuni, and once again Shakuni brought forth the loaded dice. Before long the game ended, and Yudhishthira had lost.

Duhshasana danced with joy and cried aloud, "Now is established the empire of Duryodhana."

Said Bhima, "Be not too gladsome, O Duhshasana. Hear and remember my words: May I never reach Heaven or meet my sires until I shall drink thy blood!"

Then the Pandava princes cast off their royal garments and clad themselves in deerskins like humble mendicants. Yudhishthira bade farewell to Dhritarashtra and Bhishma and Kripa and Vidura, one by one, and he even said farewell to the Kaurava brethren.

Said Vidura, "Thy mother, the royal Kunti, is too old to wander with thee through forest and jungle. Let her dwell here until the years of your exile have passed away.

Yudhishthira spoke for his brethren and said, "Be it so, O saintly Vidura. Now bless us before we depart, for thou hast been unto us like to a father."

Then Vidura blessed each one of the Pandava princes, saying, "Be saintly in exile, subdue your passions, learn truth in your sorrow, and return in happiness. May these eyes be blessed by beholding thee in Hastinapura once again."

Kunti wept over Draupadi and blessed her. Then the Princess of Panchala went forth with loose tresses, but before she departed from the city she vowed a vow, saying, "From this day my hair will fall over my forehead until Bhima shall have slain Duhshasana and drunk his blood; then shall Bhima tie up my tresses while his hands are yet wet with the blood of Duhshasana." 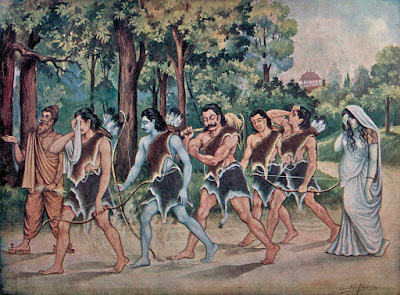 Draupadi and the Pandavas sent into exile.