PDE Mahabharata: Bhishma at the Swayamvara

Reading Guide. In the Ramayana you saw how Rama won Sita by competing in a swayamvara contest. In this episode, you will see how Bhishma takes the three daughters of the king of Kashi to be brides for the young son of Shantanu and Satyavati, but he does not participate in a contest; instead, he seizes the women in battle.

Image: The picture below is from an illustration edition of the Mahabharata in Hindi; it shows the moment when Bhishma has taken the three brides and is fighting off the other suitors.

Source. Myths of the Hindus and Buddhists by Sister Nivedita (1914). [700 words] You can find out more about the author at this blog post: Sister Nivedita.

Devavrata | 5. Bhishma at the Swayamvara | Amba

It came to pass that when Bhishma's father, Shantanu, was dead, Bhishma set on the throne his own half-brother, Vichitravirya. And it was necessary that he should find a suitable marriage for this brother in order that the royal succession might be duly secured. And he heard that the bridal choice of the three daughters of the king of Benares — Amba, Ambika, and Ambalika — was about to take place, and that all the kings and princes of the earth were bidden, their father having announced that his daughters should have for their dowry the courage of the bravest knight. So they were to be borne away by that prince whose unaided might should win them from all the rest.

Nor did the king of Benares dream, when he made this announcement, that his eldest daughter Amba was already secretly betrothed to a certain king, Shalwa by name, nor did the princess think it necessary to speak to her father of the matter, for she made sure that her true love, strengthened by her faith and the sure prospect of immediate happiness, would overbear all obstacles and, displaying his prowess before the whole assembled world, would carry her off as the prize of victory. But alas! When Bhishma heard of this bridal tournament he decided that the opportunity was an excellent one to secure suitable queens for the young Vichitravirya, and he determined to seize the three maidens and do combat for them against all comers.

In accordance with this purpose, therefore, Bhishma set out for the city of Benares as a simple gentleman without a retinue. Arriving at the royal lists, he beheld the three maidens, all unrivaled for beauty and richly robed and ornamented, and before them, ranged on thrones and in cars, under royal umbrellas and pearl-embroidered canopies, each with his proper cognizance blazoned on his banner, all the greatest of the earth. For a moment the prince paused to survey the scene; then, with a voice that was like the roaring of a lion, he sounded three times the great battle-cry that was to summon his rivals to mortal combat.

"Bhishma, son of Shantanu, seizes these maidens. Let who will rescue them! By force do I seize them, from amongst men before your very eyes!" No one could stir while the challenge was being sounded, and as for the third time the cry died away Bhishma's charioteer, in the twinkling of an eye, turned his battle-chariot and swiftly drove down upon that part of the lists where the three princesses waited surrounded by their ladies. It was not a moment before their attendants had been made to place them on Bhishma's car, with a line of his servants drawn up in front of them, and even while the great counter-challenge was ringing out on all sides, and angry kings had risen, with swords unsheathed, to leap to chariot or elephant or horseback, as the case might be, he stood alert and smiling, with bow drawn and his back to the royal maidens, ready to do battle for his prize against a world in arms.

Never had there been an archer like Bhishma. With a shower of arrows he stopped the rush that came upon him from all sides at once. His part was like that of Indra fighting against the crowds of asuras. Laughingly with his blazing darts did he cut down the magnificent standards, all decked with gold, of the advancing kings. In that combat he overthrew their horses, their elephants, and their charioteers, each with a single arrow, till, seeing how light was the hand and how true was the aim of Bhishma, son of Shantanu, all the kings of the earth broke ranks and accepted their defeat. And he, having vanquished so many sovereigns, retained his royal prize of three princesses, and escorted them back to Hastinapura, the royal city, to the queen-mother Satyavati, that they might become the brides of her son Vichitravirya the king.

Devavrata | Bhishma at the Swayamvara | Amba 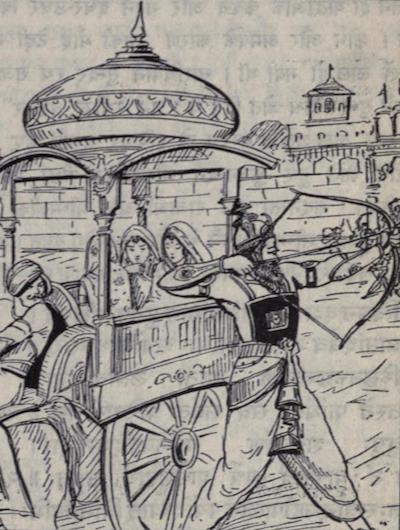