Reading Guide. After defeating the rakshasa Hidimba, Bhima will now do battle with an asura: Baka, also known as Bakasura.

Image. Bhima's preferred weapon is the mace, but as you can see in the illustration below, he's happy to use a tree trunk too.

Now Queen Kunti and her sons, after leaving Prince Bhima, had gone due southwards until they came to a town called Ekachakra, where, still dressed as brahmin beggars, they asked for and were given a lodging in the house of a brahmin who lived there. By day the brothers begged ﬂour, and in the evening Queen Kunti baked it for them with her own hands.

One day, when the sons had gone out to beg and she sat alone in the house, she heard the brahmin and his family talking to each other, as if in great sorrow.

"I shall go," said the brahmin, "for I cannot keep my life in exchange for either thine, my wife, or that of any of our children."

"Nay, my husband," sobbed the brahmin's wife, "I must go in thy stead. For if thou diest, who will give bread to our little ones?"

"My parents," interposed their daughter, "you gave me life. It is for me now to repay your gift. You stay at home, and I shall go with the cart of food."

The Queen rose and entered the room where the brahmin and his wife and his daughter were. "My host," said the Queen, "what is thy trouble?"

"Our trouble is very great," replied the brahmin. "The town Ekachakra, in which we live, has been conquered by a ﬁerce and a cruel chief called Baka. In other respects he rules us well and guards us from our enemies. But every week we have to send him as food a cartful of rice, two buffaloes, and a man or woman from one of the townspeople's houses. To each house the turn comes in due order. And if the house to which the turn has come fails to send him his weekly tribute, he enters the town with his guards and slays and devours every man and woman in the house which has left his tribute unpaid. Today the turn has come to our house, and we are trying to decide who among us shall go as Baka's blood-tax with the cart of food."

The Queen thought for a moment, and then said with a sigh, "If my son Bhima were but here, he would soon rid your town of this pest. But he is far away, wandering through the woods with the maid Hidimbi."

As the words left her lips, a shadow fell across the ﬂoor and, looking up, she saw that her son Bhima stood in the doorway. With a joyful cry she rose and said, "Thou art welcome, my son," and she told him the grief of the brahmin and the cruel tax laid on the town by the ﬁerce chief Baka.

"Have no fear, my mother," said Bhima; "I shall gladly go with the rice cart and try a fall with this pest of Ekachakra."

That evening the brahmin ﬁlled a cart with rice and, yoking to it two buffaloes, he made it over to Bhima. The Prince took the cart and drove it to a spot in the woods near which, as he had learned, the ﬁerce chief, Baka, had his dwelling. There Bhima called Baka by name and sat down quietly and began to eat the rice from the cart.

When Baka heard his name called, he left his dwelling and came to where Bhima sat eating. Enraged at the sight, Baka tore down the bough of a tree and, rushing at Bhima, aimed with it a fearful blow at the Prince's head. Bhima skilfully caught the branch in his left hand, and with his right gripped Baka round the waist. Baka, with the force of his own blow, fell forwards with Bhima above him. Bhima placed his knee on Baka's back and said to him, "It is time that the forest was rid of a pest like thee."

Then, seizing Baka's neck with one hand and his waistcloth with the other and pressing downwards with his knee, Bhima broke in two the backbone of the cruel chief. After Baka had died, Bhima dragged his body to one of the gates of the town, so that all the citizens of Ekachakra might know that they need pay the blood-tax no more to their wicked lord. When next morning the citizens saw his dead body lying by the gate, they clapped their hands, shouting and dancing with joy, and prostrated themselves in hundreds at Bhima's feet, because he had freed them from the monster Baka. 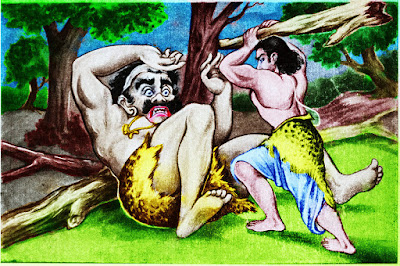