Reading Guide. The Pandavas are living in hiding, disguised as brahmins, but news of Draupadi's swayamwara brings them out of hiding — although they remain in disguise. You will also get to read about Draupadi's supernatural birth in this segment, along with the supernatural birth of her brother Dhrishtadyumna.

The Pandavas remained a time in the city, and they studied the Vedas. One day there came to their dwelling a saintly man of rigid vows, and he told the story of the miraculous births of Drupada's son and daughter from sacrificial fire.

When Drupada had lost half of his kingdom [to Drona], he paid pilgrimages to holy places. He promised great rewards to superior brahmins so that he might have offspring, ever desiring greatly to be avenged upon Drona. He offered the austere Upayaja a million cows if he would procure a son for him, and that sage sent him unto his brother Yaja. Now Yaja was reluctant to aid the rajah thus, but at length he consented to perform the sacrificial rite, and prevailed upon Upayaja to help him.

So the rite was performed, and when the vital moment came, the brahmins called for the queen to partake in it. But Drupada's wife was not prepared, and said, "My mouth is still filled with saffron and my body is scented. I am not fit to receive the libation which will bring offspring. Tarry a little time for me."

But the brahmins could not delay the consummation of the sacrificial rite. Before the queen came, a son sprang forth from the flames: he was clad in full armor, and carried a falchion and bow, and a diadem gleamed brightly upon his head. A voice out of the heavens said, "This prince hath come to destroy Drona and to increase the fame of the Panchalas."

Next arose from the ashes on the altar a daughter of great beauty. She was exceedingly dark, with long curling locks and lotus eyes, and she was deep-bosomed and slender-waisted. A sweet odor clung to her body.

A voice out of heaven said, "This dusky girl will become the chief of all women. Many kshatriyas must die because of her, and the Kauravas will suffer from her. She will accomplish the decrees of the gods."

Then the son was called Dhrishtadyumna and the daughter Draupadi. Drona thereafter took the Panchala prince to his palace, and instructed him to become an accomplished warrior. He knew that he could not thwart destiny, and he desired to perpetuate his own mighty deeds.

Having heard these words, Kunti desired to journey towards Panchala, and she and her sons took leave of their host. Before they went away, the high-souled ascetic said that Draupadi had been destined to become a Pandava queen.

Kunti and her sons wandered from the banks of the Ganges and went northwards, and soon they fell in with great numbers of people all going the same way. Yudhishthira spake to a troop of brahmins, and asked them whither they were bound, and they answered saying that Drupada of Panchala was observing a great festival, and that all the princes of the land were hastening to the swayamvara of his peerless and slender-waisted daughter, the beautiful Draupadi.

In that great and increasing company were brahmins who were to perform the sacred rites, and youths who were to take part in joyous revelry — dancers and jugglers, boxers and wrestlers, and those who displayed feats of strength and skill at arms; there were also bards there and singers to chant the praises of heroes.

The brahmins praised the beauty of Draupadi, and said to the Pandava brethren, "Come with us to the festival and the sports and the swayamvara; you will be feasted and will receive gifts. You are all as comely as princes and as fair as the bright gods; mayhap Draupadi may choose from among ye this stalwart and noble youth, strongly armed and of fearless bearing, and if he should perform mighty feats, the garland may be thrown upon his shoulders."

Said Yudhishthira, "So be it. We will hasten with you to the swayamvara and share banquet and bounty."

So the Pandavas went towards Panchala with the troop of brahmins. When they reached the city, they took up their abode in the humble dwelling of a potter, still disguised as brahmins, and they went out and begged food from the people.

In their secret hearts the brethren desired greatly to win the fair bride whose fame had been bruited abroad. 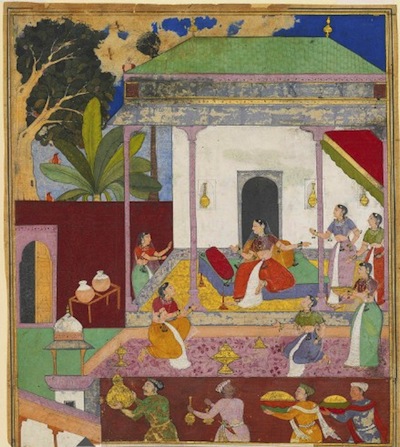 Draupadi and her attendants.